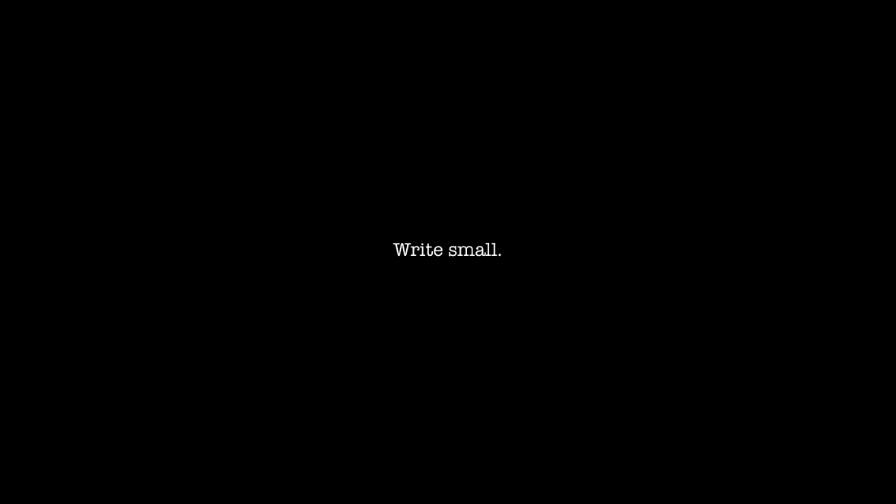 Build your text with short rather than long words; it will pack all the more punch. Long words take time to read, because our minds can only process small amounts of data at once. If you bundle thorny words next to each other, you will turn your text into a thicket and reading into a slog: Excessively convoluted vocabulary, say, takes time to untangle. Short words, by contrast, are quick to absorb at a glance and a walk in the park. Thus, in our daily routines, we shorten long terms to tame them—think of the mighty refrigerator that has long bowed to the fridge.

Short words tap, as a rule, a widely shared culture. Even the latest catchword may have deep roots: The buzz, now applied to social media, comes from the hum we make to mimic insects, which over centuries has spawned a number of other buzzwords. Many old, vivid terms are not just quick to read, but to trigger our senses. They evoke sounds, smells, and scenes that fire up our brains. As such, they hold more power than dense concepts.

Simple words also tend to unite all age groups and social classes. They bring people closer to each other when jargon would stand between them and push them apart. Complex words, which can be useful to convey complex ideas, just as often confuse people—and indeed are used in writing that seeks to impress and dictate.

It is no surprise, then, that some types of writing deftly avoid big words. To engage a broad public, retail slogans will wield words short and strong. In the late 1950s, Volkswagen launched a landmark ad campaign. which featured a tiny car on an empty page titled “Think small”: basic words to put cheaper goods within anyone’s reach. Poetry is another field that draws on simpler speech that rings deep. To borrow from Letitia Elizabeth Landon:

Tis a strange mystery, the power of words!
Life is in them, and death. A word can send
The crimson colour hurrying to the cheek.

The language of cinema holds the same sway. A blockbuster series like the Lord of the Rings owes much to its poetic, rhythmic, almost monosyllabic speech: “Three days’ and nights’ pursuit. No food, no rest. No sign of our quarry but what bare rock can tell!” Thus many films boil down to simple, potent lines that become catch-phrases within our popular culture. Take the now ubiquitous Godfather quote, “I’m gonna make him an offer he can’t refuse.” The real magic in these movies—and novels–does not blaze out of a wizard’s wand or a villain’s pistol; the audience is bound by a spell that is cast in short words that flow well.

Politicians know this, for better or worse. Like advertisers, they exploit the power of suggestive slogans to sell their wares. They may also, at crucial times, rouse the public to embrace a nobler cause. Churchill rallied his people for war against Nazi Germany with a speech that stands as a monumental example of spellbinding language. Note the sparse and shrewd use of words longer than two syllables, stressed in bold below:

We shall fight in the offices too, where the battle for plain English is raging. Most trades are overrun by ever more jargon. Leverage, synergies, paradigms, streamlining, and disruptiveness crowd out simple words through syllable creep. In the aid sector, for example, projects are not tracked and reviewed but monitored and evaluated. Rather than cutting back on clutter, the trend is to package it into acronyms like M&E, which ensure that anyone who isn’t in the know will stay in the dark. But a few basic rules will help repel the assault.

First, use long words only when needed. Some technical terms cannot be abridged; technical itself is a good illustration. Long words may be more precise: A student could be a sophomore or a postgraduate. Long words can be concise too: Philosophy, identity or civilization are common concepts that convey vast meaning in little space. Long words can also be used to create stylistic effects. By slowing down the reading, they take part in its rhythm, for instance when used at the end of a clause, discerningly. Besides, usual words are not always short: Substitute has no better alternative than surrogate or replacement, and vice versa.

Second, avoid as much as possible words that contain a prefix or suffix—and even more so those that pile them on unthinkably. A prefix or suffix by nature will stretch a word, not always for good reason. Indeed, we might as well save space rather than economize it. Long adverbs rarely add much to your text, but they undoubtedly clutter it. They may also rob the verb of the action it should describe. Put the action in the verb itself, by having someone droop her head and drag her feet, rather than walk despondently.

Most trades are overrun by ever more jargon

Third and last, bear in mind that simple words are the secret to making your prose more visual and gripping. We often overuse complex, hefty words and neglect the wealth of vibrant and nimble ones. This is mostly because we reason in abstract concepts, whereas human communication works through images, which are best conjured through short words and phrases. Thus you may think of jargon as nonsensical circumlocutions but your writing will gain from just calling it hot air. Language is full of compounds made from simple words, which provide many a shortcut and workaround that remain easy to process.

As a rule, writing in short words takes up more space. It can also take more time, as we fight against the jargon to which we all too easily revert. (This text, for instance, uses words that are much shorter than average at Synaps.) But it is entirely worth the effort: Writing “small” may slow your writing, but it will speed up our reading and ramp up our pleasure.